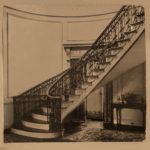 In 1928, Edward M. Schildbach, embarked on his life long career as a master stair builder in New York City. Over the next fifty years, my grandfather became well regarded by architects and builders for his high level of craftsmanship in the trade. His achievement caught my attention by age 18 and I asked to work in his shop during the summer of 1975. The following year would be our nation’s bi-centennial celebration and my grandfather was busy replicating the original staircases in the Upper Hourglass Hallway for Thomas Jefferson’s Rotunda Building at UVA which were destroyed by fire in 1895.